A One Day Course : Actions of the Heart 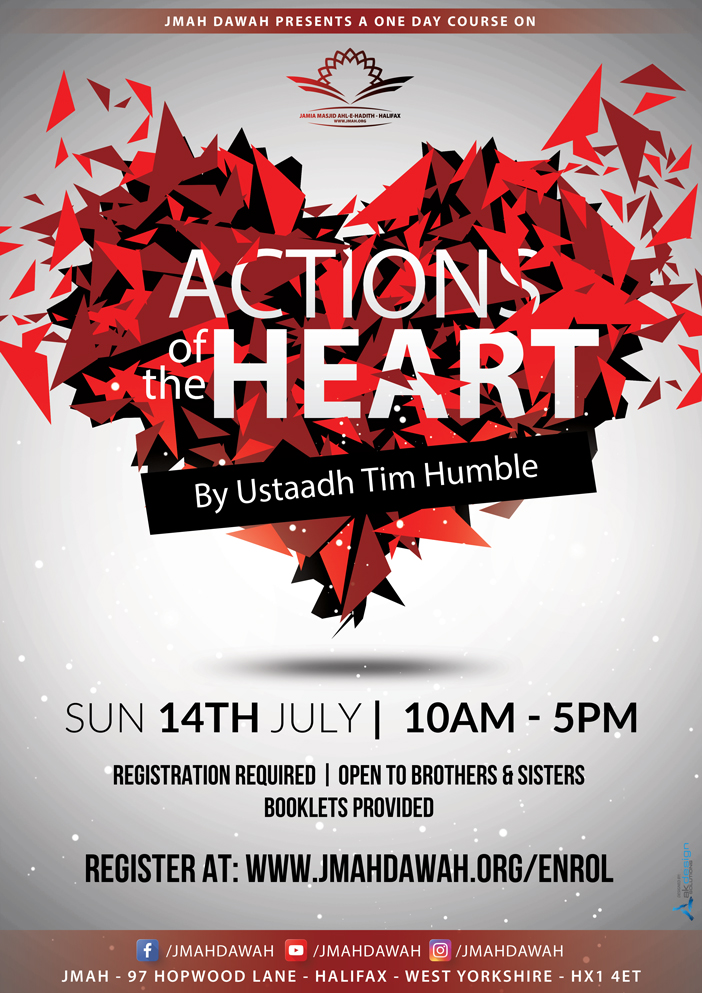 Ustaadh Muhammed Tim Humble returns to JMAH Halifax for his latest course: Actions of the Heart.

Mohammed Tim Humble became interested in Islam during Religious Education classes in Primary School. After researching it further on the internet he accepted Islam at the age of 14. Thereafter he went through a period of 4-5 years where he struggled to implement and practice his new-found faith. The Muslim community in his hometown was unwelcoming and unhelpful to New Muslims. In his own words, “One of the biggest problems we have in the Ummah is that we are excellent at selling the religion; we’re great salesmen…What we’re really, really rubbish at is keeping them in Islam once they become Muslim.”

A suggestion by a friend sparked the idea of studying in the Islamic University of Madinah. During his first Hajj pilgrimage, he applied to and was accepted into the University. He graduated from the Faculty of Hadeeth Studies in 2011. Notably, he memorized and is certified in the six canonical works of hadeeth.

He is also an accomplished Raaqee (exorcist). Based out of Newcastle, U.K., he travels the country lecturing and delivering courses on the Islamic Sciences as well as being extremely busy in administering Ruqya Shar’iyyah treatments to people.

He is currently involved with a Da’wah organisation called ‘IDC North East’ which is based in & around Newcastle. He is also the founder of a non-profit organization in UK called humblefoundation.org

This course requires prior registration:

Registration for this course is being managed by EventBrite. Click Here to Register

We're Gradually Opening with restrictions ... Click Here for more info
+ +
We use cookies to ensure that we give you the best experience on our website. If you continue to use this site we will assume that you are happy with it.OKView Privacy Policy